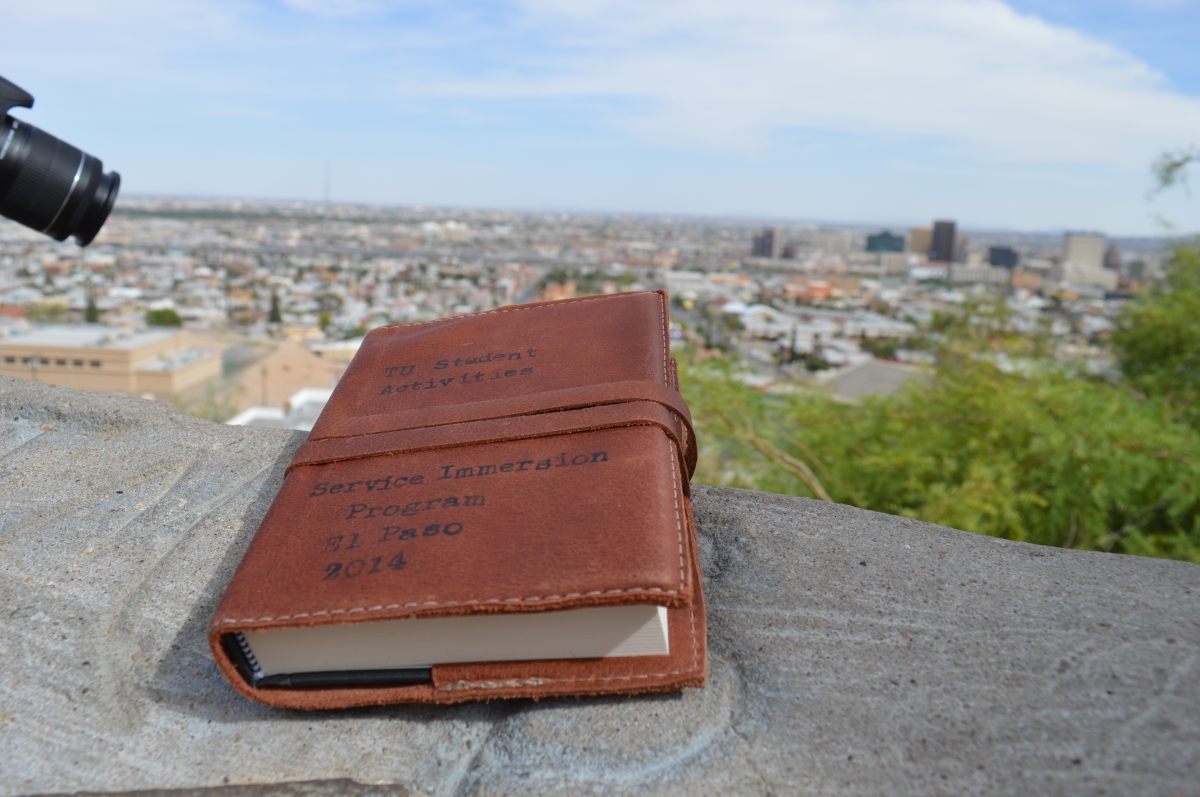 In previous post I have touched briefly on the Border Immersion program I was preparing for throughout this past semester. That time has come and gone and was an experience that I will never forget. From May 17th – 24th myself and 11 people from Temple University resided in El Paso, Texas where we were immersed in the culture of those living in the community. We learned of the many issues that people who enter the United States illegally may face and how they are dealing with the challenges. Besides it being a major culture shock and feeling like I was in Mexico, I went through a variety of emotions throughout the week from hearing personal stories and visiting different places throughout the city and New Mexico.

During our time in Texas we stayed at Iglesia Luterana Cristo Rey and the community was so giving and welcoming. Apart of our schedule on Sunday consisted of going on a downtown tour. On our way to the tour I met a few migrant workers who had interesting stories. They had to either sit or live outside for long periods of time and the bus that takes them to their work location comes at 2am and takes about 2-3 hours to get to the actual work place. They get paid about $20 a day and it’s not enough for the work that they do.  One guy stated that during the winter they have to defrost whatever it is they may be picking and many of them have arthritis so it hurts to do the job. They wanted their picture taken: 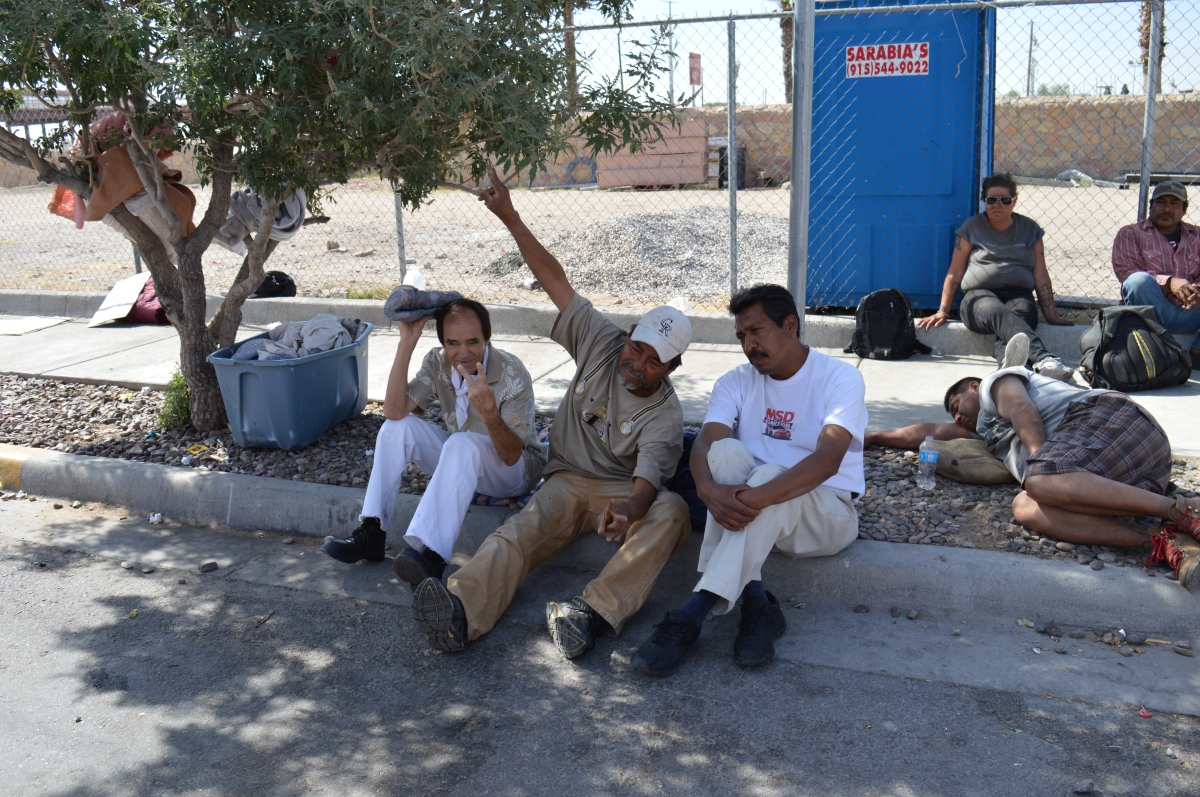 The church service ran by Cristo Rey was just as interesting because it was mainly spoken in Spanish while some English was incorporated. One thing that resonated in my mind the entire time in El Paso was how close Mexico is. We visited the fence that lies between Texas and Mexico which had a great impact because it’s looking through to another side that you are separated from. There was a lot to sit back and reflect on and I appreciate the fact that religion and faith is a key factor in the lives of most people there because it motivated me to become closer to God. A few of the community and church members were courageous and kind enough to share their own personal stories which I won’t be writing about due to the fact that they aren’t mine to share but were all very touching.

There are many places in El Paso that lend a helping hand to those in need and those who are struggling with immigration issues such as The Annunciation House and Paso Del Norte. One of the things that really sticks out to me from everything that I experienced this past week is my visit to the detention center which holds people who have entered the US illegally. Most have committed no other crimes than immigrating from their country to the US. It was a really depressing and eye opening experience for me. It was depressing because this is life and not a movie that you can pause and rewind. People are put into color groups depending on their criminal background. Blue – those who have only entered illegally with no other charges or who may have minor charges. Red – is the next level up with orange being the highest. Our tour guide contributed to the experience I had because he was very hypocritical and seemed a bit uneducated on some things. He also tried to justify the fact that when the detainees work that getting a dollar is okay no matter how many hours they put in because they provide them with everything else they need. A dollar a day is ridiculous to me and although they have a choice of working that’s not enough for anybody to live off no matter the situation. I felt bad on the tour because not only is their privacy already invaded on a daily basis but us being there only added to it. I didn’t want to make eye contact for long with people during the tour, I didn’t want them to feel like they were on display. I also didn’t like the fact that they were referring to the people that were detained like they weren’t human or less of a person, putting them into categories like Mexican and others who are not Mexican. The visit as a whole put a damper on my mood and I’ve never been in any type of jail before but everything is so controlled and they seem so helpless there. Some people go to jail because they committed a crime and this wasn’t necessarily a jail but a holding center and some people are there for years. Most of these people are those who only left their country to seek something better and it’s really sad that they have to be treated like criminals.

Mexico is a country of great poverty and crime people are only paid $50 a week. All I can say is people have to take this tour themselves and take this program into consideration to experience what I have experienced. I can’t share as much as I would like because I respect the privacy and sensitivity of what was shared out of strength and courage. Everything I learned whether I liked it or not was important and something that should be known. A lot of these pictures that I captured can explain some things better (none of them are edited): 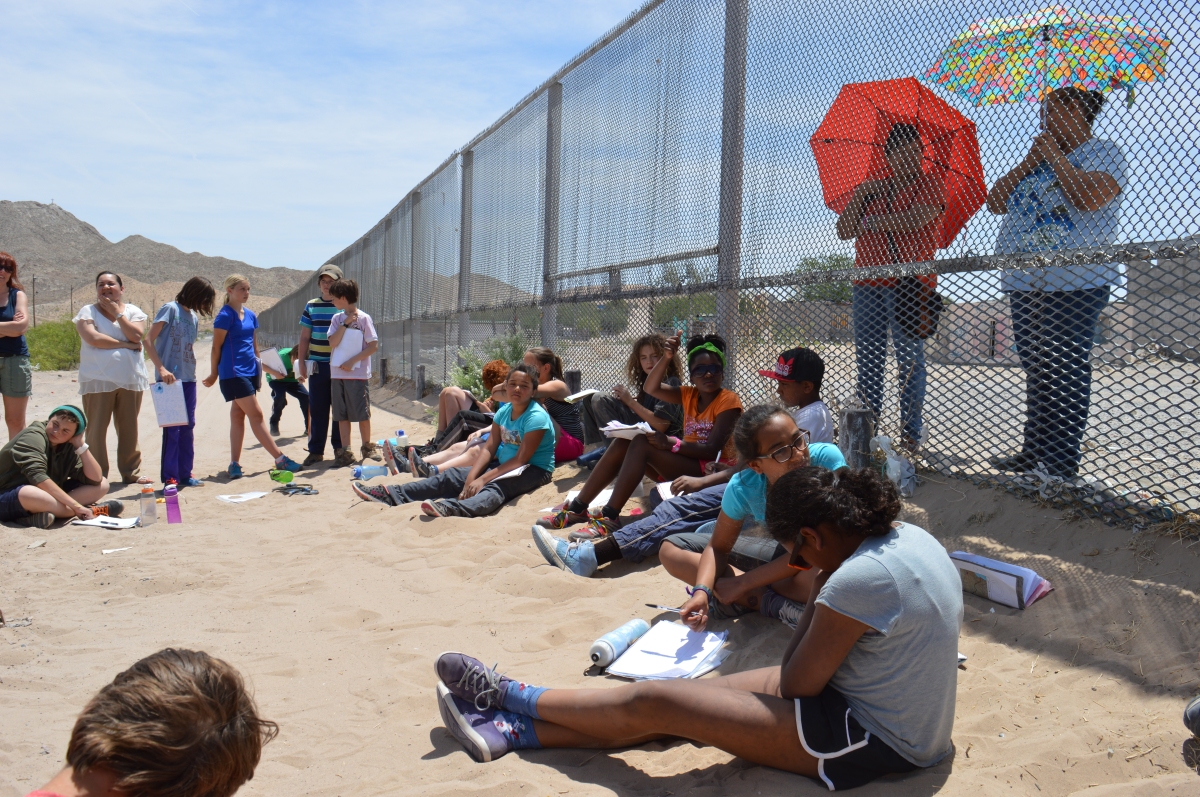 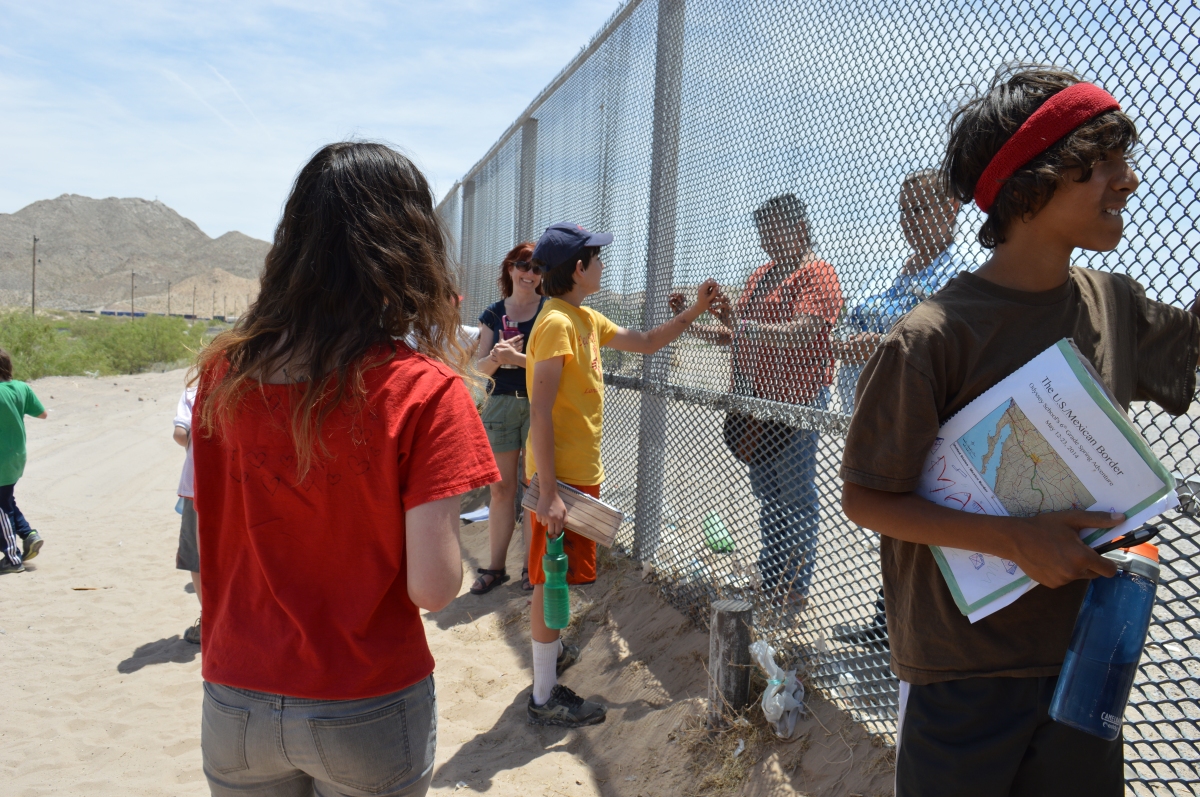 I am really excited to start my research paper although I am not sure of what to write about but I am leaning towards the femicides that happen in Mexico. I am amazed at myself because I was never really interested in learning more about immigration and the issues surrounding it until recently. The preparation for this trip leading up to the actual experience has changed my mind about a variety of things. I learned that life should be about embracing and cherishing the simple things. Luxuries shouldn’t be needed or valued as much as they are. From staying at Cristo Rey and interacting with my group members and the community I learned that simplicity is:

-no need for luxuries, faith & family are the most important possessions, simplicity out of necessity, conservation of limited resources, ability to relate to those who are living simply but not by choice, connection to non-material things and things that aren’t necessary, re-prioritizing/reallocating time, reminds  us of simple joys, putting our phones down and closing our computers, living without necessity, internal clarity, sustainability, finding peace in chaos, letting go, and expanding impact.

-the dream of solidarity, sought but not always found, humanity, togetherness, inclusion, taking care of each other, understanding, compromising, exploration of self, vulnerability, education, tolerance, respect, and language does not have to be a barrier, it expands beyond sub-groups and across borders we are a support system for each other.

-fewer handouts and more resources, more than charity, knowledge, empowerment, advocating for systematic and policy changes, empathy, being educated on your cause, long term solutions, more equality in accessing opportunities, more actions, awareness, protection against things like wage theft, and investing in education.

-the stories of immigrants, depth of feeling, contributes to sense of community, celebration with others, nature, freedom, a source of catharsis and a creator for mental health and well-being, individual faith, support, personal beliefs, gives answers for what is unknown, self-awareness (understanding of one’s own relationship with the world), helps overcome adversity, frames the experiences of community members and volunteers, unconditional love, personal quests, prayer for justice, provides explanation for the illogical, hope for the hopelessness, and strength for the weariness, and a framework for understanding.

“There’s something that unites all of us, God did not divide heaven  we as humans are the ones who made these borders. We immigrate to this country for different reasons, if you see an immigrant in your path, give them a hand.”

This is what people think of those beyond the border, and this is what the government wants us to do. Blur them out and act like they don’t exist. Let’s change this! 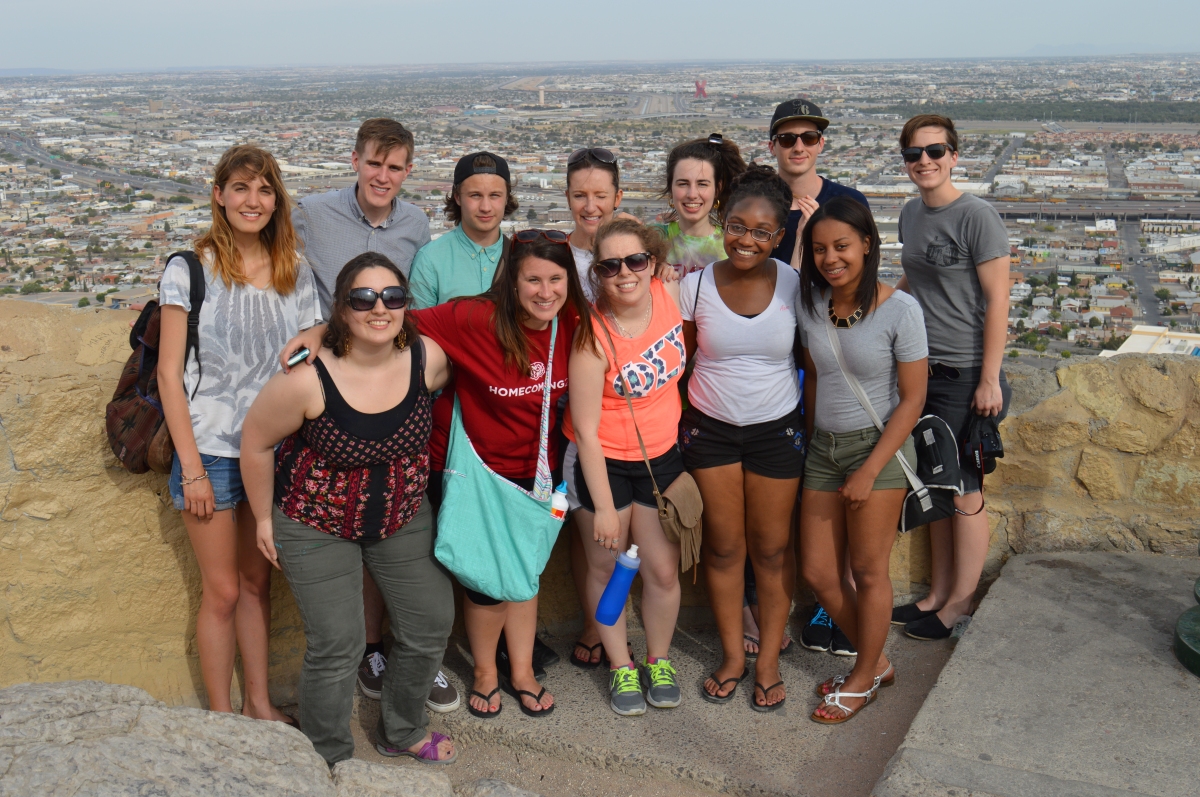 If given the chance, everyone has a story to tell. My name is Breyana I'jae, I am a 25 year old Temple University Psychology graduate, blogger, visionary, artist, creator, self published author, mama, jack of all trades, and lover of many things.  When I first started this blog in 2013 my goal was to share My Story in hopes of inspiring someone else, I didn't know where it would go, how people would perceive it or what to really do, I just know I lived by the motto, Uplift, Empower, & Inspire.  While those goals still remain my blog will now be a place to promote self-love and self-care but that's not all. Come take a look to see what it offers. View more posts